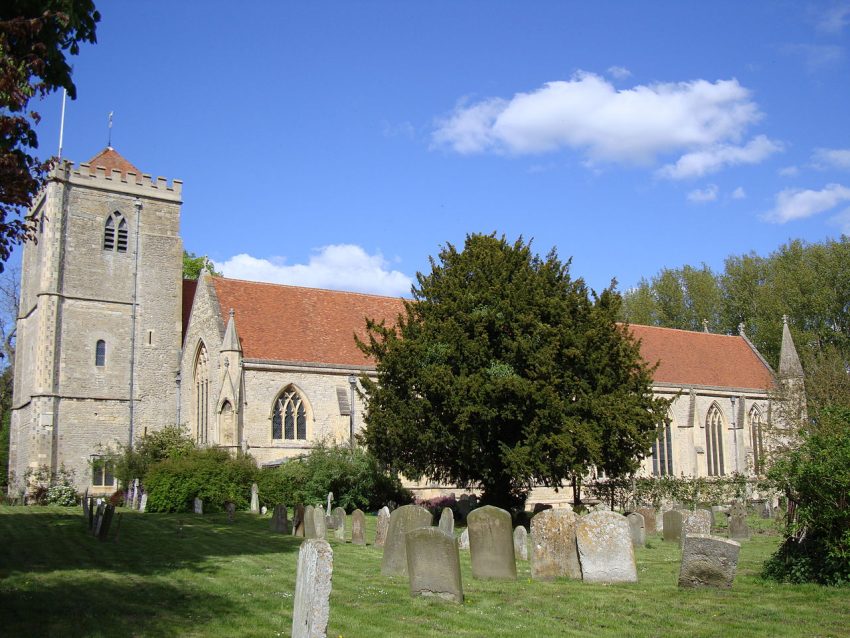 Our visit this Spring will be to Dorchester-on-Thames, a village in south Oxfordshire quite close to Wallingford, on the opposite bank, which we visited a few years ago. Dorchester is chiefly celebrated for its beautiful abbey church, one of the oldest Christian sites in England, founded by the missionary, St Birinus, in 634. At one time it was the seat of a bishopric until the bishops moved off north to Lincoln. Today the village is a pleasant backwater, its great church now the parish church, but a busy and thriving one.

The abbey is the dominant building in the village, beckoning visitors who approach from the south. Externally it is long and low, and is set at the top of a pleasant rose-bordered path from the street. It is a building of contrasts. The initial impression presented by the interior as you go in through the south door is of one of bleakness. All around are the bare, whitewashed walls of the original Norman building. But move to the west end and look east, and the glorious fourteenth-century choir unfolds before you. This is one of the great glories of England, with a series of spectacular traceried windows, all of them retaining their original glass. Unique in the sequence is the great Jesse window on the north side, its tracery carved with foliage forming a tree springing from the recumbent figure of Jesse on the sill.

In addition to its remarkable architecture, the eastern half of the abbey offers a wealth of fixtures and furnishings. In the south choir aisle is the medieval shrine of St Birinus, happily and successfully restored in 1964. Close by this is the celebrated tomb effigy of the medieval knight – the ‘action knight’, as Simon Jenkins calls him – cross-legged and vigorously drawing his sword. Against the wall is another medieval tomb monument, that of Judge Stonor, of Stonor Park nearby, who died in 1354. In the choir are the early sixteenth-century monks’ stalls, and on the end wall of the south nave aisle medieval wall paintings. Spread across the floor are the remains of many medieval brasses. The abbey is packed with interest. In the former abbey guest house, just west of the church, is an interesting museum.

Before entering the abbey we will take a short walk along the village street, which is attractive and full of character and bears witness to Dorchester’s former existence as a coaching-in village. While at one time strangled by traffic, Dorchester is today happily by-passed. The village is best approached from Surrey along the A4074 from Henley-on-Thames. When you drop down from the Chilterns and come to Wallingford/Crowmarsh Gifford, bear off to the right, keeping on the A-road, and Dorchester is a few miles further on. We will meet at 1.30pm in the cul-de-sac of Bridge End, at the southern end of the village on your left, just before you get to the abbey. It is the only place in the village where there is off-street car parking. At the end of our visit, at 3.30 we will move on to the abbey tea room, by the museum, for tea and cakes. The tea room is a Dorchester attraction in its own right.

Payment will be required prior to the visit as numbers will be restricted.