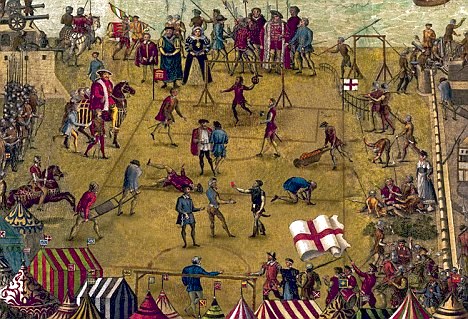 Accidental Death in Tudor Surrey: How People Died Reveals Much About How They Lived by Professor Steven Gunn, Professor of Early Modern History, Merton College, Oxford.

Professor Steven Gunn is currently leading a research project, looking into 9,000 inquests from the 16th century. One may think that these 16th century inquests are just  routine reports  into the deaths of a person, but Professor Gunn in his talk to the branch, provides useful information into everyday life of 16th century England.

The County of Surrey was formed of mixed rural and urban landscape. Most of the mortal accidents in Surrey occurred on the River Thames, which was used as the main artery to bring people, food and trade into London. Nearly half of the accidents were work related.

The accidental rates of today have now much improved in comparison to the 16th century world. Water is now piped into peoples’ home, rather than people having to take a bucket to the local river or well.  In the 16th century, it was mostly women , who had to collect the water, with a bucket, from the local well or river.

Men’s’ accidental deaths were mainly caused by mining for chalk, coal and gravel. Children’s accidental deaths mainly happened  while playing, as it was very rare for children under 7 years old to do any work. Children aged between 7-14 were allowed to work, and this many tragic accidents occurred to children of this age group

Coal mines of the Midlands and the North were a major source of tragic accidents, as well as the chalk mines of East Anglia, and the tin mines of Devon and Cornwall. In Surrey, the local brewery and charcoal burning industries, many accidents occurred. Many accidents happened with the carts being were the main source of transporting goods, and with the poor state of the roads being a major cause of carts being overturned. In the late sixteenth century, the new industry of making gunpowder started, with several factories being set up in Surrey, and with the high danger of gunpowder, this was another source of tragic accidents