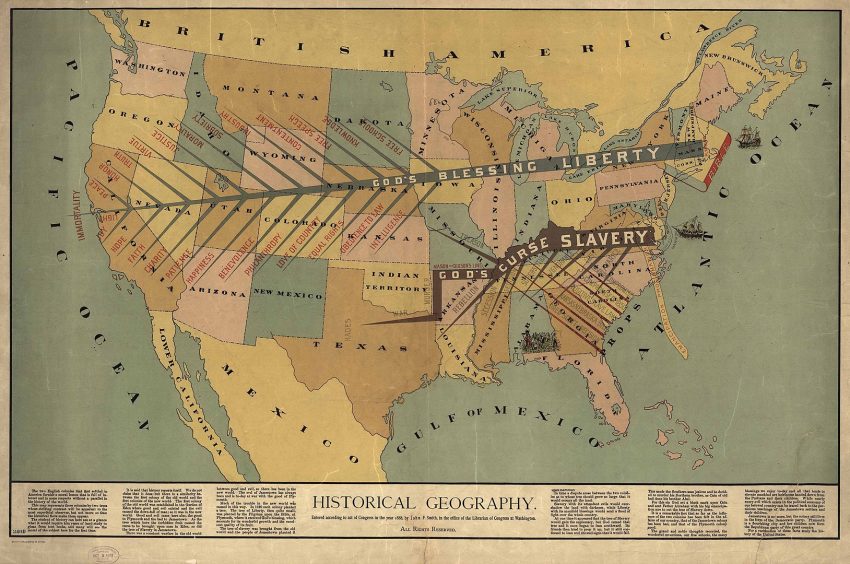 Race, Region and Rebellion: The Origins of the American Civil War 1846-1861 by Prof Lawrence Goldman, University of London.

In the north of the United States, there was a patch worth of farms, combined with the growth of industry, textiles and coalfields.  In contrast, in the south, it was completely different, a few banks, a poor network of railways, few major cities, mostly situated on the coast

In 1780, the first northern state, Massachutes, abolished slavery. With the British abolition of the slave trade, it restricted the supply of slaves to the American mainland. Slavery in the southern states dominated the way of life, and the southern farms were totally dependent on slavery for its manpower. In the south, if a person had excess wealth, he would invest in estates and slaves, while in the north, wealthy people would invest in industry.

When the the American delegates in Philadelphia, met to discuss independence from Britain, the northern delegates were keen to include the abolition of the slave trade, but the southern states were strongly opposed to this proposal, and the suggestion was quietly dropped.

The 5th amendment of the American constitution laid out the protection of US citizens, property, including slaves. If you are an abolishlist, you are  supporting a statement, that cannot be supported by the US government.

It was the expansion of the slaves states, expanding westwards that led to further debates about the future of slavery in the US. In the north, there were very few who opposed the ending of slavery, but many people in the north opposed to the principal of slavery.  The new state of Missouri, joined the Union as a slave state, which led to the agreement, that any future states who wish to join the Union, that north of 36 0, would join as non-slave state, and any new state, south of 36 0, would join as a slave state.

There are many opinions about slavery, with people in the south, saying that the status of slavery should be discussed, within the individual states, while the northern states , believed that the status of slavery, should be discussed within Congress. In 1857, the US Surpreme court had to make a decision on whether a slave that had been taken to a northern state, should now be regarded as a free man, or remain a slave. It did not help, that the Surpreme Court had previously ruled, that a black person cannot be a US citizen. The US President of the time had previously owned slaves. The President felt that the people on the frontier should decide whether to continue with slavery in the newly joined states.

The two main US political parties, Democrats and Whigs collapsed, but the Whigs reformed 10 years later, to become the Republican party, following a policy of expanding the expansion of slave states. Many people in the south disliked slavery, because it kept wages low, and threatened employment. The democratic party encouraged recruitment in the southern states, but this generated a backlash in the north, where there was  strong support for the abolition of slavery.

President Lincoln was elected as President of the United States with only 40% of the popular vote, but the oppsosing vote was split between 4 other candidates, and Lincoln was successful in winning the major northern states. No compremise was realistical available  to reach a compromise with southern states, as Lincoln’s mandate was no further expansion of southern slave states. The US had been built on compromise, but the slavery issues was far to great and complicated to reach a compromise